No doubt I had looked at the 1870 census many times before, and saw that my ancestor Esram Bough’s occupation/trade was listed as a Cigar Maker, but this time was different. I noticed that most of the ancestors of the family (George A. Bough) sons’ occupations were: Clerks, Shoemakers, and Taylors throughout the 1800’s.

I knew that Sugar was the main industry, and Tobacco was just another crop that was grown on small plots. However, due to my lack of knowledge of any cigar industry in the Danish West Indies, it was difficult for me to understand the profession and its dynamics. Therefore, I decided to do a further research focusing on tobacco.

I learned that Denmark only imported tobacco from the Danish West Indies for their own cigar production, and those Cigars that were produced in the Danish West Indies were never officially imported to Denmark as a finished product. Cigar-making on St. Croix was most likely made out of the family home. Most of these sole proprietors worked alone at a long table with their own tools, rolling cigars.(http://www.danishcigars.com/danish-cigar-history/)

Although, Esram did not establish a generation of Cigar makers in the family, however he made a profitable living out of it. I honor my ancestor, the Cigar Maker, for embracing a profession that took not only skill, and concentration, but a sense of pride that went into the making of a fine cigar. 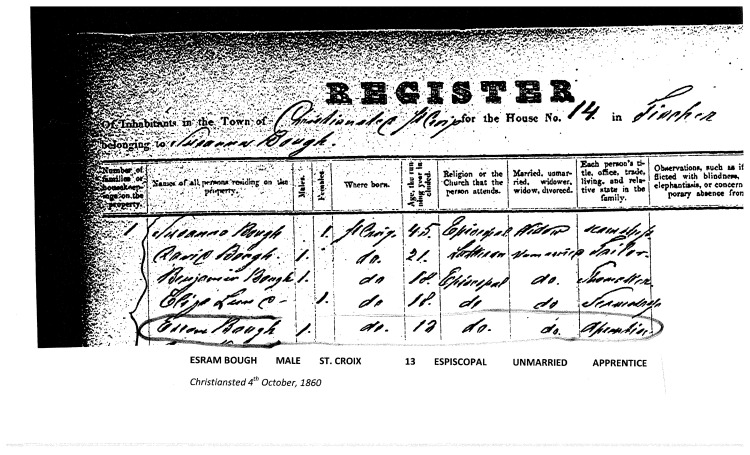 Esram Samuel Bough (twin) (1846-1900) was born just two years before the emancipation of the slaves in the Danish West Indies. He was the son of George A. Bough and Susan Crow-Bough. He was classified as a free person of color. At the age of 13, he was an apprentice in a trade. As an adult his profession was listed as a Cigar Maker. Esram Samuel Bough died in June 1900 at the age of 54 in St. Croix, Danish West Indies.

As I continue to search out my history, I am discovering how much I did not know. The more information that is disclosed about my ancestry, the more I learn and understand how I am the person that has evolved today. As a native New Yorker, with roots in Coastal Georgia and deep roots in the Danish West Indies, now the Virgin Islands of the United States or commonly referred to as the United States Virgin Islands, I have always had a yearning to return to my maternal homeland. In September of 1976, my family and I relocated back to St. Croix. While living in New York, I was always telling my friends about my trip back home, but here I was actually waking up every day, walking among the streets and people that I have identified myself with all of my life. At the time, I was not involved in any genealogical work, but I knew there was a missing link that became completed after I was offered the opportunity to transfer Danish documents into a database. That opened up my world and I realize that this was my niche. I now had the tools to explore and document my ancestry. Growing up, my mother always impressed upon her children the pride in being a “Bough”, which was her surname. Now I was able to track where that pride came from, through participating in family history projects and meeting new family, as we gathered together for the Bough Family Reunion on St. Croix in July of 2012. As I continued to research, I found my passion extending to photography. Sunsets and street art are my favorite features, as shown in my tumblr blog http://minkyadoo.tumblr.com/ I also began blogging, and found that it has help me to improve my writing skills. Through the comments and well wishes, I have been encouraged to continue to write the stories and events of my life. Whether or not your roots trace back to the Danish West Indies, you will find a beautiful tapestry of life that reflects our “baseball and apple pie”. This site affords you the chance to transform yourself to a time during the Danish period (1734-1917) where life was both simple and complex. If you have any questions, comments, or need assistance in searching for a Danish West Indies ancestor, I invite you to drop me an email.