Transfiguration Lutheran Church in Harlem is my feature for Those Thursday Places.

This place behind the red doors was the link for those who came through Ellis Island from the Virgin Islands, to what was considered New York’s new immigrants that is, West Indians. Transfiguration Lutheran Church was considered the Way Mark for Virgin Islanders that had emigrated to New York to connect with their culture and heritage. Among the many Virgin Islanders who left St. Croix during the Great Depression were my maternal grand-parents Julius and Caroline Gasper-Bough who settled in New York.

Pastor Paul West (my mother’s godfather) was the first full-time pastor at Transfiguration Church. People would talk about his kindness and how he was known for seeking out church members from St. Croix that arrived at Ellis Island, to assist them with the adjustment period in New York City, which included attending church, where one would meet up with other Virgin Islanders.

Looking back as an adult at the Church, I realize what a great effort it took for the many families that traveled into Manhattan (Harlem) from Queens, Brooklyn, Bronx, on the subways, for Sunday worship and to spend time with relatives. This was the place where we learned discipline, respect, and a love that permeated into a strong sense of togetherness. I recognized the value of our heritage, as we intently listen as children to conversations in dialect about St. Croix and its people. At Transfiguration, we shared much in common, including family cousins. There continues to be a bond of love and recognition among those who once attended this place of worship.

During the summer of 2011, I was afforded the opportunity to visit New York City. While in Harlem waiting for my daughter who was getting her hair braided (which takes hours upon hours), I decided to take a walk along 125th Street. I saw the old landmarks: The Apollo Theatre, the Adam Clayton Powell Plaza, and the merchandise of the many vendors.

After an exhausting tour, I thought, “hey, why don’t I go down to the West side and see Transfiguration Church”, so I took a bus from ST. Nicholas Avenue to the West Side and then walked up one block to 126th. Street. Things did change in the neighborhood. The corner newspaper candy store was now a Starbucks Coffee Shop. Up the block you could see a famous outdoor soul food café. Places were different and so were faces. Harlem now had a diversity of people. This place was plain different. When I turned the corner on 126th Street, and glimpsed those red doors to the church, I knew I was home.

What a feeling of joy and the fond memories that took over me, I wanted to go back and get my daughter so she could see and hear the stories, but I couldn’t. So I turned the knob, and to my surprise the door was open. I saw the altar where we took communion. The pews, everything, appeared so much smaller. Lo and behold, Pastor Paul West’s youngest son came to the door and welcomed me in with the warmest smile.

What a wonderful conversation we had about those days. He was able to bring me up- to- date on some of the members I once knew and many that I no longer remembered. I was able to bring him up-to-date to the happenings on St. Croix which became my home for over 30 years. 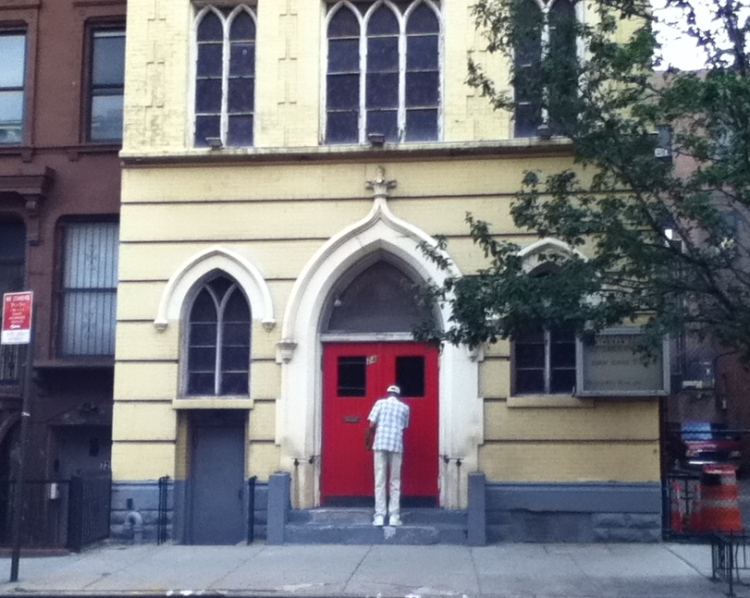 We came out of the church, he locked the doors went on his way. I locked that moment and that place, in my mind forever. This year, Transfiguration Lutheran Church commemorates and celebrates its 90th year at 74 West 125th Street, New York, NY.

As I continue to search out my history, I am discovering how much I did not know. The more information disclosed about my ancestry, the more I learn and understand how I am the person that has evolved today. My family's research efforts have taken me on an enlightening journey back through the past in the U. S. Virgin Islands (formerly Danish West Indies) and Coastal Georgia. As with most people of Afro-Caribbean descent, my ancestry stems from peoples brought together by colonialism and conquest; it stems from people thrown together, albeit forcibly, by the throes of enslavement. As a result, my DNA tells me that my people originate in Africa, Europe, England, Ireland, Scotland, France, Lesser Antilles, and Leeward Caribbean Islands. Two collections made my dream to research my ancestors in the Danish West Indies a reality. I have conducted extensive research using the St. Croix Population Database 1734-1917, a St. Croix African Roots Project product, and a research and document transcription effort sponsored by the Virgin Islands Social History Associates (VISHA). The other catalyst has been accessing the extensive photo, manuscript, and microfilm collections at the Library and Archives of the St. Croix Landmarks Society at Estate Whim in St. Croix. My heartfelt thanks go to all my cousins, extended "cousin-family," friends, and research colleagues from the St. Croix-based Virgin Islands Ancestry Discovery Group, for their input and collaboration. I also want to thank the UJima Genealogy Group in Coastal Georgia and GlynnGen.com; webmaster Amy Hendrick has introduced me to Southern History and its people. This site allows you to transform yourself to a time during the Danish period (1734-1917) when life was both complex and straightforward. If you have any questions, comments, or need assistance searching for a Danish West Indies ancestor, I invite you to drop me an email. Its.sheldew@gmail.com I especially appreciate the followers' encouragement.